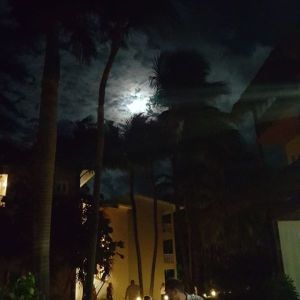 The walls of a cheap flat were killing her. Corner to corner, floor to ceiling, she hated the miasma of coffee, sweat, and cigarette smoke.

One night, the balcony door was slightly ajar. She crept out when she had the chance. A humid wind tossed the palms that sighed and dipped their long fronds. The moon broke from a cloudy sky.

She tiptoed to the concrete’s edge, raised her abdomen, and spun. Streamers of silk drifted and tugged as they caught on the salty breeze. She clung until the force grew too great then sailed into the night. Destination unknown.

The meta-story.  I took some liberty with biology in this story.  Stegodyphus sp. are social spiders, and my antagonist was solitary.  However, I needed an example of an adult spider that would use this method of movement, and the choices were limited.  Primarily, spiderlings are known to do this (i.e. ballooning).

But let’s pretend this particular Stegodyphus female was somehow transported from her habitat and trapped in the apartment, therefore, her discontent and peril.  In a longer story, I could show how her goal is to rejoin her colony (nest?  swarm of terror?–you really don’t want to see the pictures of group feeding *shudders*).

That night, escape alone was sufficient.  And maybe that’s how it would happen.  Once she’s free, she can think about how to get home.  Or, maybe–and I like this better–risk and the unknown are inherent in throwing her silk on the wind.  There’s no logic beyond the need of the moment and the impulse.