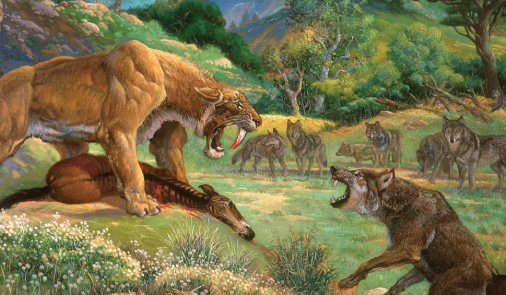 The saber-toothed tigress dropped the dire wolf pup from her jaws.  Her healthy male cub wriggled up the den’s mouth to leap on the bloody prey.  Hunger averted again.

A growl outside the den made the cub shrink and sink his fangs deeper into the pup’s flesh, guarding his meat. The dam’s ears lay flat. The hair rippled on her back. She snarled with rage, answering the threat, and swatted her cub, knocking him deeper into the burrow. Spinning, she faced a dire wolf bitch, who had tracked her pup’s scent a mile from her lair.

The tigress sprang. The cub’s view of the battle was a tangle of limbs, claws, and fangs. He dropped the dead pup, snapped, and caught a wolf leg in his jaws. Though flung about in the fight, he hung on. The wolf’s live blood tasted sweet.

The dire wolf fell dead. His mother clamped her jaws on a shoulder to drag the carcass from the passage. Her cub streaked from the den and pounced on the body, savaging the hide while growling in his throat.

The tigress stretched on her belly and licked a bleeding wound as she watched her cub maul their kill.